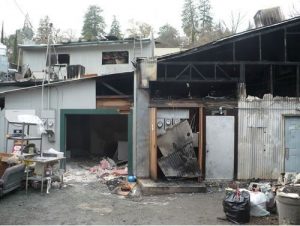 Sonora, CA — Just about any firefighter will admit fighting a fire in an historic building can present monumental challenges.

According the CAL Fire Investigator Rommie Jones a number of those challenges materialized Tuesday during the Bombay Restaurant fire on S. Washington St.

Jones states that one of the major problems is that many of the historic buildings are connected and if a fire starts in one building it can climb a wall and move into an attic and then spread to another building. That is exactly what happened Tuesday as the blaze moved into the attic of The Koto Restaurant next door to the Bombay.

In addition Jones says that aluminum wiring rather than updated copper wiring often proves to be a hazard. Also the old fashioned “balloon” (no firewall) construction presents an ominous challenge to firefighters.