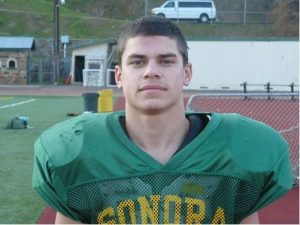 Sonora, CA — For the second week in a row the Sonora High Wildcats will be on the road for “second season” play.

Tonight the 10-2 ‘Cats, winners of back-to-back playoff games, will be in Auburn to meet the 11-1 Placer Hillmen from the Pioneer Valley League.

From Head Coach Bryan Craig, “They’re an athletic team up front. Everybody looks at their skill position players and they have some outstanding statistics. Their running backs put up big yards and their quarterback has thrown for a lot of yards but what everybody overlooks is how athletic that offensive line is. They play pretty good defense as well. I think it’s going to be a challenge for us Friday night.”

Asked if the Wildcats are at all intimidated about playing on the road senior wide receiver and cornerback Dan Molieri commented, “No, that’s the funny thing we’ve talked about all this year. We’ve enjoyed playing on the road. There’s no better feeling than playing at Dunlavy Field but to play on the road and beat somebody at their own house is a whole other feeling, and it doesn’t matter how far we have to drive if we come out with a victory it’s worth every second.”

On the Wildcats’ family atmosphere, junior quarterback Ryan Emerald, “Anybody on this team would take a bullet for anybody. We’re all brothers here and we started calling Coach Dad because of it because he’s like our Dad. We can talk to him about anything. We definitely have a brotherhood here.”

The STAR 92.7 pregame show will get underway at 6:45 with the kickoff set for seven o’clock. The game will also be audio streamed on myMotherLode.com.

Should the Wildcats win they would meet the winner of tonight’s Central Catholic – Modesto Christian game next Friday evening at seven o’clock at Lincoln High School in Stockton for the Division IV title.