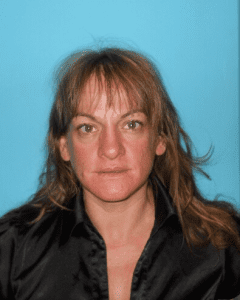 Sonora, CA – A female motorcyclist is in jail with a $90,000 bail after leading CHP officers on a 12-mile chase at speeds exceeding over 100 miles-per-hour.

According to CHP Sonora Unit officials, the incident occurred Labor Day Monday just before 4 p.m. after a CHP officer traveling on Highway 108 near Mono way spied a 2014 Yamaha motorcycle without a rear license plate.

Officials say as soon as the officer flashed emergency lights to make an enforcement stop, the driver, later identified as 44-year-old Monica Lynn Relaford of Modesto, sped off. Relaford reportedly traveled onto Serrano Road momentarily when she laid the motorcycle down and fled the scene on foot. However, the officer pursued and quickly apprehended her.

A registration check on the motorcycle revealed it was reported stolen out of Stanislaus County. Additionally, Relaford — wanted on several outstanding warrants for probation violation and failure to appear in court — was also found to be driving without a license and in possession of drug paraphernalia.

She was booked into the Tuolumne County jail for felony evading with wanton disregard for public safety, resisting arrest, possession of a stolen vehicle, other related charges and on the outstanding warrants.