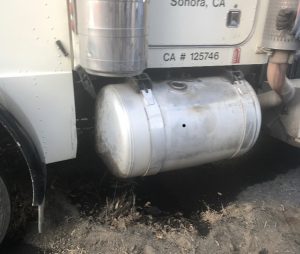 Update at 11am: The CHP reports that Tuolumne Road is back open following this morning’s crash. See earlier reported details below.

Update at 8:10am: The CHP reports that a stretch of Tuolumne Road will be closed until approximately noon due to the crash that occurred at around 5:45am.

Updating earlier reports, 46-year-old Stacy Hightower of Tuolumne was riding his 2016 Victory motorcycle when a three-point buck ran into the westbound lane. The motorcycle collided with the buck and Hightower was ejected onto the northbound roadway shoulder. The motorcycle then slid into the eastbound lane into the path of a Peterbilt big rig truck driven by 57-year-old Dimitirous Postolu of Sonora. The motorcycle caught on fire, and the Peterbilt’s fuel tank ruptured, causing diesel fuel to dump onto Tuolumne Road. Fortunately, the CHP reports that Hightower suffered just minor injuries.

Tuolumne Road is closed between Soulsbyville Road and Black Oak Road. A detour is set up around the crash site. The county’s roads department is on scene working to quickly clean up the fuel, and the environmental health department is also assisting with the effort. CAL Fire and the Tuolumne County Sheriff’s Office are also helping with the response.

Original story posted at 6am: Sonora, CA — The CHP reports that there was a notable crash at 16850 Tuolumne Road at around 5:45 this morning.

A motorcycle hit a deer and the rider was ejected. The motorcycle then continued on and was hit by a big rig truck. Thankfully, at that point, the motorcyclist was no longer on the bike.

Officials report that the rider is up and walking around following the crash, but an ambulance was still requested to assist the rider. The incident caused a brief roadside fire that was quickly extinguished. It also leaked diesel fuel across 200 yards. You will notice quite a little bit of activity in the area. The road is temporarily closed and the CHP will be conducting traffic control.