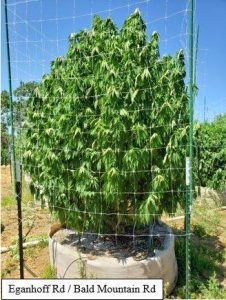 At a site located in the 1400 block of Hidden Valley Road, the team took out 219 marijuana plants that in total weighed nearly 2,500 pounds. Deputies also seized 72 grams of processed marijuana and arrested two suspects at the scene.

Later that day, the team and wildlife officers served a search warrant near the 2000 block of Bald Mountain Road and Eganhoff Road. Arrested on site was 43-year-old Zachery Cockerton of Jackson and the team destroyed 91 marijuana plants totaling 1,820 pounds. Cockerton is facing charges of illegal marijuana cultivation with Water Code and Fish and Game Code violations, and possession of marijuana for sale

Several parcels located in the 6000 and 7000 blocks of Cedar Springs Road in Mountain Ranch were the focus of the MET and environmental officers the next day. Calaveras sheriff’s officials state that these parcels were previously searched and eradicated last year.

During the visit, members found multiple environmental violations on the parcels, including water diversion, and that marijuana was being grown in wooded areas and along the banks of a flowing creek. By the creek, investigators discovered a camping area with roughly made shelters.

Overall, the team destroyed over 2,940 marijuana plants and seized 4.25 pounds of processed marijuana. Officials add that Calaveras County Code Compliance and the State Water Board continue to investigate the parcels for multiple violations, and while no persons were arrested, the case is ongoing.

To view photos from the site busts, click into the image box slideshow