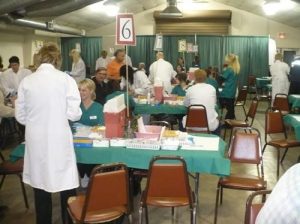 Services offered this year include a blood draw for a blood chemistry panel ($20). Those who wish to take advantage of this service should fast for a minimum of eight hours.

According to Coordinating Nurse Kathy Amos the popularity of this event grows each year. From 2006 to 2007 there was an 11 percent registration increase. Add to that a six percent increase from 2007 to 2008. For each of the last two years the two day Fair has drawn over 4,000 registrants.

For those with early work schedules the Fair opens at 5am. For the general public it opens two hours later. The Fair closes each day at 3pm.