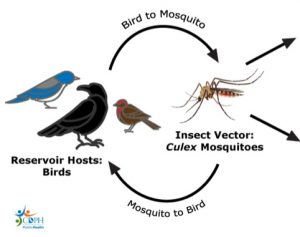 Sonora, CA – An alert from Tuolumne County health officials after a bird has tested positive for the West Nile virus (WNV) — protect yourself against mosquito bites.

Environmental health staff headed to the property to investigate. They identified the bird as a California Scrub Jay, according to Kostlivy, who details that genetic samples sent to the state lab for analysis and came back positive.

As reported here last month, Koslivy’s department put out a health bulletin relaying a warning from the CDPH that WNV activity was increasing throughout the state. Kostlivy says this detection signals an early warning that mosquitos carrying the virus are present in the county and the public should use protection against getting bitten by mosquitos.