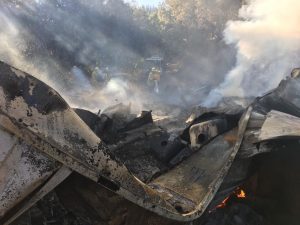 Sonora, CA – Sheriff’s officials are sharing the ID and disturbing demise of a recent fire victim.

The coroner’s office has confirmed that the deceased person found near a Columbia home destroyed by fire last week as 39-year-old Dionecia Valencia. Two juveniles are charged with her homicide. The next of kin have been contacted and notified of the circumstances surrounding the investigation.

According to Tuolumne County Sheriff’s spokesperson Sgt. Andrea Benson, physical evidence, statements, and the autopsy lead investigators to believe that an ambush-style attack took place the night before the fire, involving the two suspects and multiple bladed weapons and that she succumbed to those injuries.

Early Aug. 13, as reported here, the sheriff’s dispatch received multiple calls reporting a residential fire in the area of Adelleana Lane in the Big Hill area.

Benson states that responding deputies to those calls observed two male juveniles walking along the roadway but due to the nature of the call, they continued to the scene in the event rescue efforts might be necessary. Near the scene, the deputies talked with an adult female who was walking away from the fire. The woman said she had been sleeping in the residence and awoke to flames. She also shared that her friend may have still been inside and that she was unable to locate her friend before she escaped the flames.

Deputies found the residence fully engulfed and inaccessible as multiple local fire responders arrived and began extinguishing the flames. As the house fire was being contained, deputies and fire personnel discovered a second blaze in nearby vegetation in which a deceased person, now determined to be Valencia, was discovered as firefighters worked to suppress the fire.

Benson recounts that due to the nature of the scene, sheriff’s detectives and a pathologist from the Stanislaus County Sheriff’s Coroner Division were called in. At the scene, they presumptively determined that the body was that of a female who had died prior to the fire’s ignition. Blood, weapons and other evidence were discovered in the area and collected for further processing.

She continues that, through a joint effort, the detectives and original responding deputies, positively identified the two juveniles earlier seen walking from the fire as two sixteen-year-old males and located them. It turned out they were known to the victim. After questioning, the pair was arrested based on several obtained statements and evidence that tied the two suspects to the scene.

Benson says an autopsy of Dionecia’s body, conducted at the Stanislaus County Sheriff’s Coroner Office, determined she died of “multiple sharp force and chop force injuries” to her head and upper body. She adds that the juveniles are currently being held on charges of murder, attempted murder, and arson and that investigative interviews continue as physical evidence, including DNA, is still being analyzed.