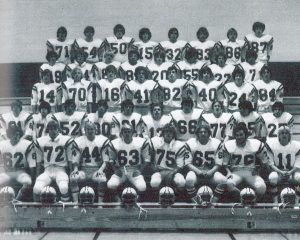 Angels Camp, CA — Bret Harte High School will this fall induct 15 honorees and a team into its 2019 Athletic Hall of Fame.

School officials say a “Hall of Fame Weekend,” set for Friday and Saturday, Oct. 4-5 will kick off with an introduction of the new class at Bret Harte’s home football game against Amador High. The following evening, they will be honored at an induction ceremony and dinner to be held on the Calaveras County Fairgrounds at Mark Twain Hall.

The school’s 1979 varsity football team, led by head coach Hal Clements, will be celebrating its 40th anniversary. The season started with high hopes after their CIF Sac-Joaquin Section run in 1978. Defeating Hughson and Escalon in the first two games, the Bullfrogs suffered their only loss of that season to Patterson, the, won the next nine games to finish the season 11-1 and be named Division III Section Champions. While in that post-season, the team suffered a 13-0 shutout at the hands of Le Grand High, it produced a semifinal matchup 20-12 win against Rio Vista, which allowed the Bullfrogs to secure and then win the championship game 19-12 against Justin-Siena Catholic High School of Napa.

Notably, the 1979 squad was the first Bret Harte team to win a Section Championship. Since then, an additional 37 teams have earned a Section championship title. The varsity coaching staff that landmark season included Rich Cathcart, class of 1967 and 2018 Athletic Hall of Fame inductee, Tim Elam, and the late Don Villella.

To view some team photos, click into the image box slideshow.

The rest of this year’s honorees are as follows:

Officials note that individual inductees were considered primarily on their achievements as Bret Harte High student-athletes and/or coaches, although character values, during and after their high school years, are also a major consideration.

Tickets to the dinner, which is open to the public, are $35.00 per person, available weekdays in the school office from 7:30 a.m. until 4 p.m. For more details, click here.