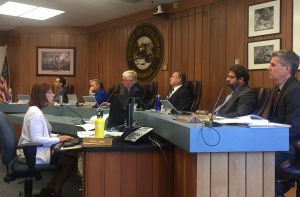 Update at 3:10pm: The supervisors reconvened during the afternoon session to further discuss the budget. The board agreed they would ideally like to find a way to keep the bookmobile running, as the money saved by closing it would be minimal. Supervisor Anaiah Kirk mentioned that he would like the county to take a stand to close the Juvenile Detention Facility, however, there was not additional supervisor support because the county has been made aware it would be responsible for repaying the state $16-million in grant funding that had been awarded for the project. The other supervisors agreed with Kirk though that the county needs to put pressure on the state when it comes to juvenile detention funding. The supervisors will also prioritize public safety as the top positions to reinstate in the event of additional revenue becoming available. The supervisors will further discuss the budget on September 3rd. It must be approved by next month. See the below story for an earlier recap regarding services and positions that will be impacted.

Original story posted at 1:25pm: Sonora, CA — While the final budget will be voted on next month, the Tuolumne County Administrator is recommending the elimination of the CRA Director, General Services Agency Director and Library Director.

They were among the high profile proposed cuts detailed by CAO Tracie Riggs at today’s meeting. She opened up by noting, “This is not an easy process. Any time you have to look at making reductions, it is not easy.”

The county is facing $4.2-million shortfall.

The CRA department would see the most change. The proposal is to eliminate the director position of David Gonzalves who was hired in 2016. Looking at overall savings related to the single position, taking into account salary and benefits, Riggs said it would save around $240,000. The county would also eliminate two assistant CRA Director positions, but then create new positions of Community Development Director and Public Works Director. In addition, there would be the elimination of three planners, a permit tech, principal plans examiner and a senior environmental health employee. The overall CRA restructure would save around $696,000 annually.

Eight months ago the county voted to create a General Services Agency to oversee things like libraries, recreation, veterans and facilities. Daniel Richardson was hired as the director, after previously serving in the CAO’s Office. In an effort to save around $297,000 annually, today’s proposal is to eliminate Richardson’s position and bring the services back over to the CAO’s Office. Long term, Riggs indicated that she feels having a GSA department is the best route, but current revenue is not allowing for it.

The library would see the elimination of its Director Deborah Samson, who was hired in 2017, along with discontinuing the book mobile, and a reduction in relief staff by $25,000. Riggs noted that the library, and all of the branches, would maintain services, but the level would decline.

The Recreation Department would reclassify the current Recreation Manager to a new Recreation/Library manager position. It also calls for the elimination of a vacant recreation supervisor position, and an increase in fees of $145,000. Overall savings would be around $198,000.

Separate from recreation, Standard Park, would see an increase in fees so that around $68,000 in additional revenue can be collected. Also, the county’s youth centers will increase fundraising activities in hopes of receiving business sponsorships.

The Sheriff’s Office would freeze three vacant deputy positions, reclassify a vacant sergeant position to a deputy and reclassify a corporal to a deputy. Overall department savings would be around $487,000.

During public comment, there was a heavy number of supporters who spoke in favor of Animal Control Services. The county’s proposal calls for a freeze in an animal control officer position which would bring an overall savings of around $58,000.

It was noted that new fees and taxes are expected to be part of the overall budget strategy moving forward, but those specifics will be determined at a later time.

Board Chair Karl Rodefer thanked the county staff and public for giving input during the presentation of all the proposed cuts. The supervisors continued to work through the noon hour, and then broke for lunch at 1pm.