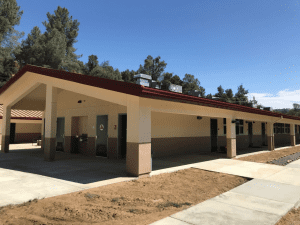 Sonora, CA — Final construction is wrapping up on a $3.9 million project to replace 10 classrooms that were damaged by fire in January of 2017 at Curtis Creek Elementary School.

The 11,500 sq. ft. new building houses grades K-3, and teachers and staff have been busy over the summer months moving furniture and setting up the classrooms in anticipation of the students arriving this Wednesday.

After previously serving the past several years as Principal, Terri Bell, has stepped into the role of Superintendent/Principal this year, following January’s resignation of outgoing Superintendent Sharon Johnson. Speaking about the new building, Bell says, “We are really excited because this has been a long time coming. We’re glad to be back in a permanent home after almost two years. The classrooms are brand new and awesome.  I wish I was teaching in them.”

Following the 2017 electrical fire, classes were housed in temporary portable buildings, and those have now been removed from the school grounds. The new building was built by Royce Construction owned by former Tuolumne County Supervisor Evan Royce.

Bell notes that the community is invited to take a tour of the new building this Thursday starting at 4:45pm, with a final tour leaving at 5:30pm. From 5-6pm there will also be an open to the public bbq fundraiser for the school’s playground.

Immediately afterwards, Back to School Night, for students and family members, runs from 6-7pm.

On a related administration note, in addition to Bell stepping in as Superintendent/Principal for the new school year, the district has tabbed Sherri Wells and Stephanie Miller to split their time between teaching in the classroom and serving as assistant principals.

The school, located along Standard Road in East Sonora, has an enrollment of around 490 students.

(Click on the image box to view multiple pictures)