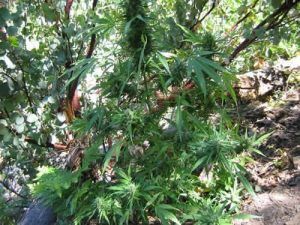 Sonora, CA — The close of the 2009 record setting marijuana eradication season for the Tuolumne Narcotics Team (TNT) is right around the corner.

Late last week the team pulled 6,703 plants in three locations throughout the county running the yearly total to 200,400 as compared to only 107,000 last year which was also a record setting year. At a conserative estimate of $2,000 a plant that equates to $400,800,000 the Mexican Drug Trafficking Cartel has lost this year in Tuolumne County.

TNT Sgt. Craig Davis says the illegal Mexican nationals who man the grows rarely return to a site that has been eradicated.

Davis adds that he will go to great lengths to avoid any kind of a confrontation with the illegals in the grows. He comments, "A plant is simply not worth the life of one of my men."

This year three Mexican nationals were arrested and bound over to the INS. Davis adds that they will probably serve a short prison term, be deported and possibly return in a month’s time to start all over again. "While they are in prison we feed and cloth them and meet all their essential needs. When they’re deported they return home, turn right around and return to the U.S. in a very short period of time to start the cycle all over again. They really know the system."

Asked if he thinks TNT is making a difference, he states, "Yes I do. If we were not in existence all that marijuana would be sold on the streets and the profits would be used to finance the Cartel’s super methamphetamine labs in Mexico. I don’t know what kind of a budget they have but anybody has to be hurting a little bit if they lose as much as they have lost in our county ths year."