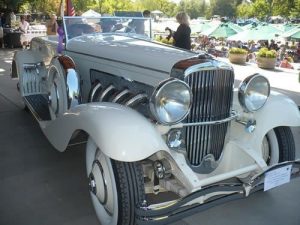 Murphys, CA — Shades of Mae West were in evidence Saturday afternoon as a 1934 Duesenberg Model J Murphy once owned by the “Why Don’t You Come Up And See Me Sometime” actress captured the Open Car honors at the 13th Annual Ironstone Vinyards Concours d’Elegance.

In the Closed Car Division, Jules Heumann of San Francisco drove off with top honors in his 1937 Hispano Suiza K6 Chapron. He also finished first in the Class D1 European Classic Division.

This marked the first year that Concours d’Elegance awarded two top overall awards: Open and Closed divisions. Overall there were 314 entries in the 31 classifications including antique motorcycles.