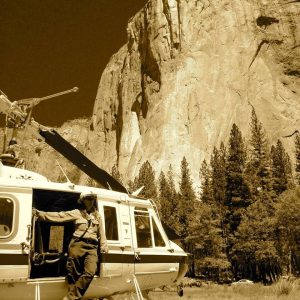 The honor recognizes individuals who have demonstrated outstanding work, actions, or programs in emergency medical service for the nation’s wildland firefighters.

Officials state that over the past eight years, Wonenberg, who is Yosemite Fire’s Medical Coordinator, has implemented emergency medical programs for both the fire and aviation helicopter units. While continuing to advance her own skills, she is credited with setting up training modules and field-based scenarios to train Yosemite National Park medical personnel on proper methods of patient care during helicopter operations.

Park officials share a photo of the rescue medic standing on Helicopter 551 following a landing in Yosemite Valley’s El Capitan Meadow that can be viewed in the image box. Wonenberg continues to serve as a subject matter expert and critical instructor for the park’s wildland firefighters and cooperating medical personnel.