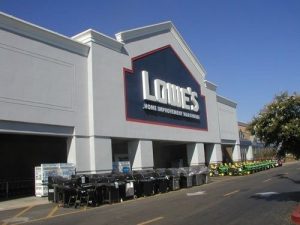 The projects have been part of a long standing dispute that has found its way through the court system and back to the City Council.

“This is something that we’ve worked upon for quite a while,” says Applegate. “We’re very thankful that all parties have been able to successfully negotiate this agreement.”

He says the final issues were related to open space, landscaping, historic preservation and aesthetics. Applegate says the agreement reached will allow the Lowe’s project to move forward without any further opposition from the Citizens group.

Asked if any money changed hands as part of the agreement, Applegate says, “No, and that was one of things we were pretty adamant about. We were focused on mitigation items and trees and landscaping, etc.”

The final agreement was reached when City Attorney Richard Matranga and Community Development Director Ed Wyllie met with Citizens representatives Barbara Farkas and Marilyn Fullum, as well as the organization’s attorney Keith Wagner. The City Council had authorized the City Attorney to settle on the City’s behalf. Additional parties in the settlement agreement are California Gold Development Corporation and Lowe’s.

There are no major hurdles left for the Lowe’s project, but it will still need to receive some permits before breaking ground. Over the next several months the City will move forward with the process of amending its General Plan and Zoning Ordinances to reflect various land uses with the project.

The City estimates that once the store is built off Old Wards Ferry Rd., it will create 120 jobs and generate an estimated half million dollars annually in tax revenue.