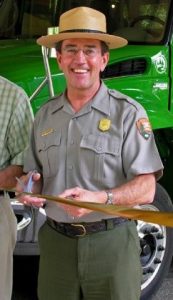 Yosemite National Park, CA — In an exclusive Monday interview Acting Superintendent Dave Uberuaga was questioned about the wisdom of ordering a prescribed burn this past Wednesday, a burn that has now charred 4,909 acres as of 8:30am today.

Uberuaga signed the order on the morning of Wednesday, August 26 to ignite what was to have been a 91 acre prescribed burn. That fire reportedly escaped within its initial hour.

Question: Why would you start a prescribed burn given the heat and the fact that California is now in the third year of a drought? …

Answer: “The drought in California was something that was factored into the decision. At the elevations we’re dealing with at Yosemite we have a lot of analysis that goes into anything that leads into a prescribed burn. Those are scientific. They look at everything from temperature and humidity, what is the drought conditions.”

Question: Knowing what you now know, would you ignite the Big Meadow prescribed burn again? …

“Yes. As a manager if I don’t continue to evaluate and take the risk it’s easier not to do it in a short term to avoid any confrontations, to avoid any difficulties. If it does escape but it’s the wrong decision in the long run, I have the best fire team in the country. We have a lot of good science. I have to continue to make those decisions and assume those risks in order to protect a larger fire in the Park; to protect the communities in and around the Park that are totally surrounded by parkland and I’ll continue to do this with good science and the staff that I have … yes.”

Question: How did the fire get out of control so quickly? …

Answer: “What got it out of control, the what went wrong kind of question, I do not know and we don’t have an answer for that. I asked for an inner agency outside review and I’m anticipating having a team come in within a few days to look at that exact answer. They’ll look at photos and everything we can lay out but at this point we do not know exactly what happened.”

Question: Given the extreme heat and the continued drought would there not have been a more opportune time for this prescribed burn? …

Answer: “The fuels have to be dry enough to have a successful burn. One of things you don’t want to do is to have a burn that doesn’t have enough heat to take care of the conditions we need to resolve. We had eight hours of rain Saturday, the 22nd, up here and it’s really is a different world up here at 4,700 feet. We have much cooler temps than the Valley.”

Question: Will you conduct a full evaluation of the entire process rather than just this fire by itself?

Answer: “Yes, we’ll back up and ask our team to look at the overall process, what led up to it, what’s our staff’s capability, and we’ll look at every component of that and say o.k., is there something we can improve on in the overall process.”

Question: Do you have any kind of a message to those that have been so affected by this fire?

Answer: “First of all we must continue to have prescribed burns in the manager’s toolbox for the greater good over the long term. Secondly I have told the community that I regret what has happened and take full responsibility for leading us out of this situation.”