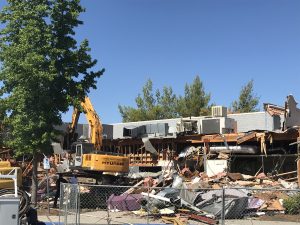 Demolition of the former Sonora Denny's

Sonora, CA — Work is underway to remove the former Denny’s restaurant in the Timberhill’s Shopping Center in Sonora.

The building at 1001 Mono Way served as a Denny’s for decades until its closure in August of 2011. For a short period, between 2013-15, it also housed as an Original Buffalo Wings restaurant.

Last September the Sonora Planning Commission approved a proposal to demolish the building so that a new KFC restaurant could be constructed, equipped with a drive thru window. The owner of the property is Los Altos based Harmon Directors Investment, LLC and the project manager is Clifton Sorrell of the San Rafael based firm VMI. Building permits were issued to demolish the building on June 25, and the prep work started last month. Heavy equipment is now on scene and the demolition has commenced (see video). A chain link fence is up around the property, and those visiting the shopping center will notice activity this week.

Once the building is removed, construction of the KFC should begin later this month. An opening date has not been announced.

You can also click on the image box to see renderings for the new KFC.