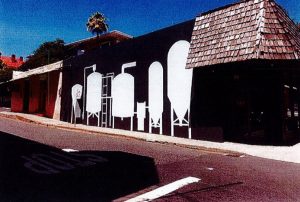 Sonora, CA – Those frequenting the downtown Sonora area may have already noticed the new mural pictured in the image box that is causing a bit of a stir.

The outline of brewing equipment is painted on the south side of the Sonora Brewing Company building, formerly the Lighthouse Deli, located at the corner of Washington and Bradford streets. The problem is — it was never approved. Sonora Community Development Director Rachelle Kellogg notes, “Most of the time when we have a mural, we see the application before it’s installed, but in this case he wasn’t aware of the requirement. So, were doing it after the fact.”

The business owner is Thomas Silva, who recently submitted a design review permit application for the brewery to the Sonora Planning Commission. It will take up the issue at its Monday night meeting. The application highlights how the mural captures an activity in the city that has been around since the nineteen hundreds. Silva uses photos of past bars, breweries and liquor stores from the Tuolumne County Museum, which can be viewed here: mural approval letter and application , to prove his point.

In the application, Silva adds, “This mural will be a constant reminder during events such as 2nd Saturday Art Night, Sonora Certified Farmers’ Market, Magic of the Night, Sonora’s Christmas Parade, and many others of the longstanding comradery our community stands for.”

In the agenda material for Monday’s meeting, however, Tuolumne Heritage Committee takes issue with the mural, believing it is more of a sign promoting the business and not a historical mural. In a written comment, they want it to be “reworked,” and suggest “a portion [of the mural] could be retained and the Sonora Brewing Company’s distinctive logo be placed next to it [the mural],” conforming to city sign ordinances.

Kellogg says she does not know of any other complaints regarding the mural, but proposes, “We will have people at the meeting, I’m sure, speaking in favor and some may be speaking against. We’ll know on Monday night.”