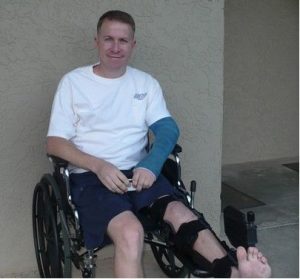 Aiken suffered tramatic injuries to the left side of his body when he crashed his police cruiser while in pursuit of Peter Loren Barrett early Saturday morning, May 16 on Lyons Bald Mountain Rd.

Aitken no longer wears a neck brace. His left arm and leg remain casted. This Friday the Sonora native will start some limited physical therapy. He is hopeful that he will be able to be semi-mobile and under his own power by Thanksgiving.

Emotionally it’s been a tough grind for Aitken. He admits the most difficult part has been being imprisoned in a hotel room during the healing process.

As far as Barrett is concerned, "I have no ill feeling toward Peter … I don’t even know Peter. The feelings of anger and frustration I have are with the decisions he made that night. What I have not been shown by him is any kind of an apology or sympathy. Perhaps that has been on the advice of his attorney. His father did send me a card wishing me well. I just hope that he realizes what his decisons have led to and takes responsibility for those decisions and learns from them and helps others not to make the same decisions that he did. That would be the best thing that could come out of this."

Aitken is also undergoing counseling which is presenting him an opportunity to learn how to deal with the emotional and physical trauma of the accident.