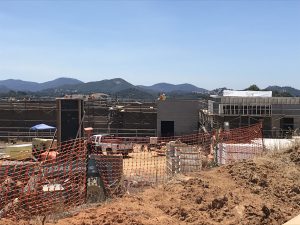 Sonora, CA — During a presentation today on the Tuolumne County Supervisor goals and priorities, it was noted that construction is progressing well on both the new jail off Old Wards Ferry Road and the taxiway improvements at the Columbia Airport.

Related to the jail, Deputy Administrator Maureen Frank noted that construction is around 72-percent complete and final completion is slated for January 17. The new facility, at 63,000 square feet, will be nearly double the size of the current facility, which is 31,157 square feet. It will be able to house up to 240 inmates, compared to 147 at the existing location.

In regards to a $3.9 million taxiway improvement project at the Columbia Airport, Manager Benny Stuth stated that the work is 75-percent complete with full completion expected next month. He noted, “When we are done, we will have addressed about 250,000 square feet of pavement at the airport, and we are, so far, exactly on budget.” Funding for the project came from an FAA grant.

Sheriff Bill Pooley added that the Sheriff’s Office has also successfully moved its patrol, civil coroner, investigations, and evidence storage into a new office at 19890 Cedar Road in Sonora.

However, on a negative note, when talking about planned resiliency centers in Groveland and Tuolumne, Deputy Administrator Frank stated there are some new wrinkles and questions that have emerged related to funding for both centers. County officials will meet with state leaders on August 23 regarding the projects, and it was noted that the county is still hoping to build both centers.

The projects were mentioned during a discussion from department heads regarding progress made on 2019 goals and priorities.