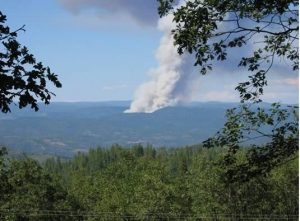 According to Pat Kaunert of the Stanislaus National Forest those evacuated cabins are the only structures that have been threatened by the three day old fire that has burned up canyon during the daylight hours and down canyon during the nighttime hours.

Between 550 and 600 firefighters on are on site and that includes 16 20 man hand crews. In addition there are 27 engines, 10 water tenders, six air tankers (four "heavys" from Stockton and two medium from Columbia), four heli-tankers, five medium helicopters with water buckets, eight dozers and 75 support personnel to oversee the Hess Meadow Incident Command Post.

Kaunert adds this is a most difficult fire to fight due to the extremely steep terrain. He adds, "There are trees to cut and brush to thin out so we can make some progress on this fire."

For a map of the Knight Fire click here.