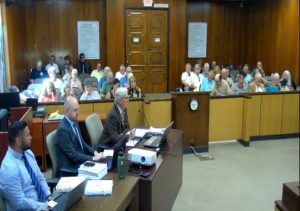 San Andreas, CA — The board chair of the Calaveras supervisors opened today’s special meeting on the General Plan indicating a hope that the document will be approved by late tomorrow.

Supervisor Jack Garamendi noted that it has been 23 years since the last update.

He stated, “This has been a long time in the making, and a lot of people putting in an incredible amount of effort, weekends and night, to make this happen. I want to thank everyone sincerely.”

He then stated, “I think everybody here will agree that the current General Plan is in bad shape….and we have to complete this update. A delay in order to reach total perfection on this document will mean that we have to work under the existing General Plan. It is my hope that this fact alone will drive us to reach a consensus and move forward.”

As for the structure of the hearing, there are nine elements in the plan, and each one will be reviewed, followed by a board discussion, and then public comment. Garamendi noted that today’s meeting will run until noon, break for lunch, and then conclude at 5pm. There will be a second meeting tomorrow, beginning at 9am, breaking for lunch, and then continuing until a resolution is determined. Garamendi indicated that the hope is that the plan will be adopted by late tomorrow, but if not, he noted there is a possibility it could be further discussed during a special meeting in August.

Garamendi stressed that once the plan is adopted it can be revised various times throughout the year, and he referred to it as a “living document.” He encouraged everyone who does not like what they see in the current round to petition the county to make changes in the future.

You can read the proposed General Plan update, which serves as the county’s plan for land use, by clicking here.