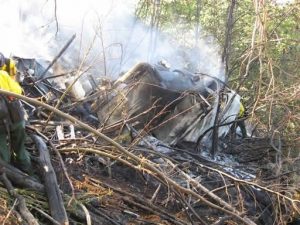 In a story just made available to the Yosemite National Park Media Relations Department and now to MyMotherLode.com, Abbe was on his way to work on the Wawona Rd. As he entered the pullout approximately two-and-a-half miles south of the Wawona Tunnel he was informed there was a vehicle over the side of the roadway and it was on fire. Abbe was told there were two people in the vehicle.

Some 30 feet below the road surface Abbe saw the fire in the engine compartment. He was able to help James Bachman and Doroth Hovland exit the vehicle.

When Abbe learned the truck was filled with 70 gallons of gasoline with an extra 50 gallon gas container and two full propane tanks he immediately led the two through thick brush and back to the roadway.

Within minuts the truck (on its side) and the trailer (upright position) were engulfed in flames starting a quarter-of-an-acre fire that was quickly extinguished. The truck and the trailer were a total loss.

Both were treated for smoke inhalation and released.

Thursday the Huntington Beach pair will return to Yosemite to present Abbe with a plaque for his act of heroism.