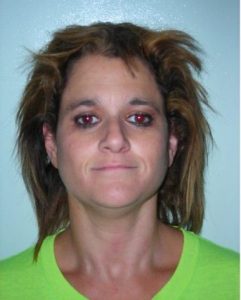 Sonora, CA — 36 year old Jennifer Alberto of Sonora was arrested Thursday evening and booked into the County Jail on a robbery charge.

According to Police Chief Mark Stinson an S.P.D. officer heard two females arguing in front of Zane’s Iron Horse Bar on S. Washington Street at 11:11pm. Immediately one of the women, later identified as Alberto, returned to the bar and ran out the backdoor, got into the passenger’s side of a Toyota pick-up truck and left the immediate area.

The unidentified female told police she had lost her purse while in the bar. She then noticed that Alberto was in possession of her purse. During the ensuing confrontation a strap on the purse broke and its contents fell to the ground. It was at this point that Alberto returned to the bar and made her escape.

A short time later officers located Alberto sitting in the Toyota pickup. She was taken into custody without incident.