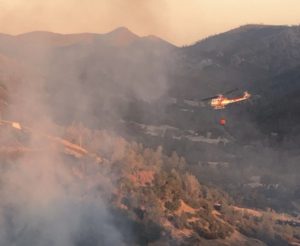 CAL Fire reports the fire started in a vehicle and then spread to nearby grass along the roadway. Initially, the fire was reported at about three acres, as reported here. This morning CAL Fire relayed that the flames were contained at two acres around midnight.

No evacuations were needed, but the roadway was closed for several hours with traffic being detoured onto New Priest Grade around the fire activity. Although an ambulance was called to the scene for the vehicle’s occupants, the CHP indicated that they declined any assistance. Crews remained on the scene mopping up and checking for hotspots overnight.