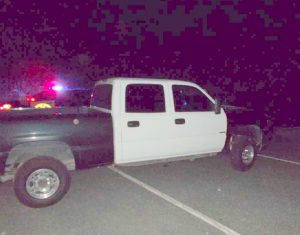 The suspects pickup at the scene of his arrest

Sonora, CA — After attacking a woman, a Sonora man then allegedly jumped into his pickup and fled the scene with his baby inside the truck — he was later arrested for DUI.

Visual injuries could be seen on the victim that resulted from an argument she had with 21-year-old Walker Meyer, according to Tuolumne County Sheriff’s spokesperson Sgt. Andrea Benson. The victim told deputies, who arrived at a home in the 9000 block of Highway 49 in Sonora early Wednesday morning, Meyer was drunk and had punched, choked, and pushed her during the conflict. Meyers allegedly then jumped into his pickup where his one-year-old child was and took off almost hitting another woman, who along with the victim, tried to stop him from fleeing the scene.

Meyer was found several hours later at the Tuttletown Recreationl Area on Reynolds Ferry Road near New Melones Lake, off Highway 49 in the Tuttletown area. DUI testing revealed that he was under the influence of alcohol, states Sgt. Benson. He was taking into custody without incident. No details were released regarding the child’s status.

Meyer faces spousal abuse, criminal threats, false imprisonment with violence, kidnapping, willful cruelty to a child, assault with a deadly weapon, DUI and driving without a license. His bail was set at $100,000.