State Of The Art Breast Care Program Coming To Calaveras 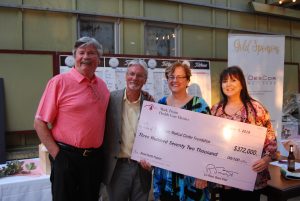 MTMC Foundation Chief Philanthropy Officer Julie Eckardt-Canterall further describes the arrangement as a wonderful example of how entities with a common mission to improve local health care can partner to make an even greater positive impact within the community.

“We really owe all of our thanks to the voters of Calaveras County, because they supported Measure A, which included in the lease agreement support of the medical center through the foundation,” she continues. “The foundation can now accept up to $1 million from the health care district to be matched up to $1 million from Dignity. That’s $2 million worth of impact straight into services, programs, and technology here at MTMC. It’s huge…a wonderful gift and investment in our community.”

Under the provisions, the partners have 365 days, roughly until towards the end of next June to decide how the $2 million will be allocated. The breast care program, funded in part by the district for $372,000 with an equal match coming from the hospital foundation, will bring 3D mammography and breast coil MRI technology to Calaveras County that is comparable to that of university medical centers.

Plans To Be Up And Running Before Year’s End

Along with the technology, the new program, which will be based within the MTMC Radiology Department, will provide enhanced physicians’ and clinical services. “If something is detected, we will have the care coordination and navigation services to walk side by side with each patient’s next round of diagnostic imaging or treatment,” Eckardt-Canterall maintains. She anticipates that MTMC will have the technology up and running by the fourth quarter of this year. Advanced cancer treatment is the next phase in development, she adds, along with future plans to have surgical and cancer treatment components.

Smart says the health care district decided to begin with a focus on women’s health. “Honestly, breast cancer is…the most common cancer in women — and can be one of the most fatal. So, it occurs in at least one in ten women — and if you detect and treat it early — the survival rates are probably approaching 94 and 95 percent.”

What it means Smart says, “Women will get state-of-the-art imaging, won’t die of the disease and they will get treatment in a really friendly way. Better yet, with the million-dollar deal, we still have $628,000 that we can still donate towards Mark Twain Medical Center projects — and we are fully in and are going to do it.”

Eckardt-Canterall confides, “We are looking at the strategic plan from the district’s and hospital’s side for the rest of the funds and expect to make some announcements over the next six months — and hope they will have as much of an impact as the breast health program. As good stewards of this gift we want to make sure we are benefiting as many people as possible and in the right area.”

Previously the foundation raised $2.4 million for the James Dalton medical office building that is now nearing completion in Angels Camp and in the past two years, it has purchased a variety of technologies for the hospital.

The district is building its own multi-million-dollar health and wellness center in Valley Springs, slated to open in early fall. While Eckardt-Canterall points out that since the foundation established in the 1980s, the district has provided solid support, the new developments helping make the new breast care program possible are indeed something special to celebrate.