Cause Of Sonora Fire Unknown 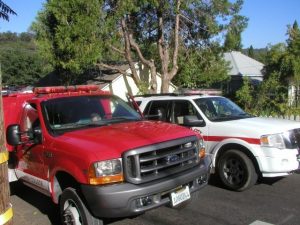 Sonora, CA — Firefighters quickly extinguished a fire that started inside a home in the 200 block of North Washington Street this morning. City of Sonora Fire Chief Mike Barrows reports that a renter of the residence said he came home during the eight o’clock hour and noticed heavy smoke.

There was a lot of heat coming from one of the rooms and some of the contents were on fire.
“It had a lot of potential, so it was good that the renter came home when he did,” says Barrows. “Had it continued for another 15 minutes, we would have had a fully involved structure fire.”

Barrows says the cause of the fire remains under investigation. North Washington Street was briefly closed down to traffic, but is now back open.