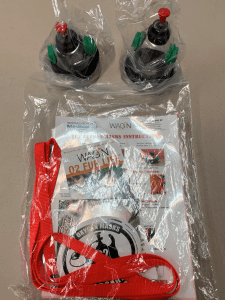 Copperopolis, CA – A Mother Lode fire protection district is crediting a gift of lifesaving tools from a local animal advocacy group with saving the lives of two pets during a recent house fire.

Copperopolis Fire Protection District Fire Captain/Paramedic Matt Sowell recounts the incident occurred a few weeks back in a subdivision off O’Byrnes Ferry Road during the daytime. Fortunately, as the homeowner was not there at the time, a neighbor noticed light smoke beginning to emanate from air vents in the eaves and promptly called 911, also noting that two dogs were probably inside.

Within a few short minutes, firefighters arrived and made a forcible entry with specialized tools to perform a search and rescue and locate the seat of the fire. Sowell says the unit pulled in hose lines and used thermal imaging (TIC) cameras in the heavy smoke, searching for the fire source and signs of life.

“They located the dogs tucked back into a room, and obviously these animals were scared to death — both had severe carbon monoxide poisoning,” Sowell recalls. One of the animals, a full-size adult Queensland Heeler, roughly five or six years, was actively seizing. He describes the other, a mixed breed puppy about four to five months old, as stiff as a board and probably breathing 40 to 50 times per minute. “Both were on the verge of death, and we immediately ran the dogs out to the back of the ambulance and began giving them oxygen treatments and other resuscitative measures.”

The equipment used included specialized one-time use masks made for domestic animals donated to the fire district by the Calaveras Humane Society. “It was something we never had before,” Sowell says thankfully, adding that the group had received several kits made by the company Wagn, and delivered four to the unit and dispersed others to other area fire agencies. (To view pictures of the apparatus, click into the image box slideshow.)

“We were able to deliver 100 percent oxygen to them…the paramedics provided 30 to 45 minutes of extensive care with full attention on the animals,” Sowell shares.

“When the animals began showing signs of life — we got the one to stop seizing and the other to get the breathing down — we made arrangements to bring them with their masks and oxygen tanks to Angels Camp Veterinary Hospital,” he continues. “The vets were aware and waiting for the dogs, as soon as they got in they got antibiotics and more treatments. We were told about two hours later that the dogs were stable, would be receiving more treatments, and that they would make a fully recovery.”

Sowell calls the event the first successful animal rescue from a residential structure fire during his nearly seven-year tenure at the district. “This is the first time that we ever had these specialized masks that have been used by the fire district and they were successful.”

The captain notes that over the past 15 years, he has maybe used such kits maybe twice. “Unfortunately, many times, because of how fast fire can move, carbon monoxide kills pets faster than fire impacts,” Sowell explains. Other good news relating to the incident is that the district’s responders not only performed a successful rescue but they also contained the fire to one room and saved the house.

“That fire, once it neighbor happened to see it, firefighters were able to catch it in the early stages, and make a quick knockdown, Sowell says, estimating the total time of the call was about four hours on scene.

He is quick to emphasize that he did not see that the homeowner was negligent at all. As far as prevention efforts, residents should always think of the basics, such as not leaving gas stoves on and make sure to plug in all appliances correctly and not have exposed wires. “In the winter time, space heaters left on cause a lot of fires because of the larger amount of power that they draw,” Sowell continues.

“In this case though, it was just an unfortunate situation and we were able to help out the homeowner and her beloved animals.”