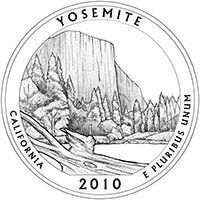 Yosemite, CA — Yosemite National Park is inviting the public to attend a special ceremony July 29th to celebrate the launch of the new Yosemite Quarter.

This free event which starts at 11 am will take place in front of the Yosemite Valley Visitors Center and feature live music and special guest speakers. Children under 18 in attendance will also receive a free Yosemite Quarter to commemorate this special day.

This is the second time that Yosemite National Park has been featured on a quarter. The first quarter, featuring Half Dome and John Muir was released in 2005, and was part of the 50 State Quarters Program. The latest Yosemite Quarter featuring El Capitan and the Merced River will be available at banks across the country starting July 29th.