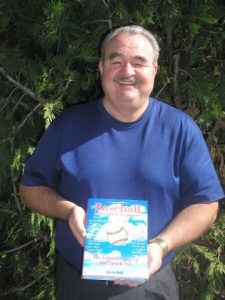 Sonora, CA – A Sonora man has authored a book that is a tribute to the late Bobby Bonds.

Hall approached Bonds 15 years ago about writing a book that has different points of view and opinions from various celebrities and baseball legends from the 1960’s and 70’s. Hall says Bonds liked the idea, but the book never came to fruition.

Hall and Bonds formed a close friendship that started in the early 1970’s.

Hall was a batboy for the Los Angeles Dodgers in 1971, but was homeless and living on the streets.

In the foreword of the book, Bond’s wife Pat writes, “Gary details how Bobby rescued him when he was homeless in Southern California, moved him to the Bay Area and then provided him with a secure, healthy lifestyle.”

Hall became a batboy for the San Francisco Giants in 1972, briefly lived with the Bonds family, and remained close with Bonds until his passing in 2003.

The beginning of the book features stories about Bonds written by Hall, Dusty Baker, Jimmy Davenport and Tito Fuentes. Other parts of the book feature general stories and opinion from 24 ballplayers or dignitaries that were around the game in 1970’s.

The book can be found at some Sonora businesses. For more information click http://www.baseballlegendsandlegacies.com/.