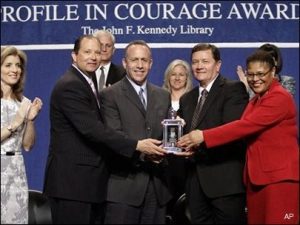 Boston, CA – District 14 Republican State Senator Dave Cogdill was one of four lawmakers to receive the 2010 Profile in Courage Award Monday at a ceremony at the John F. Kennedy Library in Boston.

Cogdill went against his party by including tax increases in last year’s budget compromise. Cogdill says he is a fiscal conservative, but there was no other choice.

"Nowadays, many if not all Republicans run on a platform extolling the virtues of Ronald Reagan," stated Cogdill. "I share their admiration, and the truth is he was a Republican who as California Governor was forced by circumstances to raise taxes."

"In fact, all three succeeding Republican Governors over the last 50 years faced a similar dilemma, and all of them had no choice but to approve tax increases as part of a budget compromise."

The award was created in honor of President Kennedy and is given to recognize the work of elected public servants.