Murrison Speaks Out On Kennedy Meadows 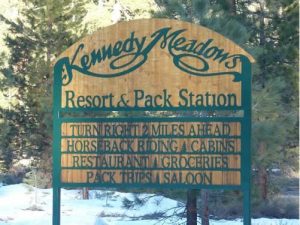 “It” being signing a letter of intent with the Stewardship Council tomorrow at the supervisorial meeting regarding transferring the fee interest from P.G.& E. to the County for Kennedy Meadows.

The 240 acres are owned by P.G.& E. but they have to be transferred to a non-profit entity as part of the ongoing legal settlement.

According to Murrison, “The process will now go into a confidential negotiation process but once the letter of intent is signed and the transaction terms, which establish guildlines not hard and fast policy but guidelines for the negotiations … once those are passed by our Board it will begin to move quicker and we could have some type of outcome anywhere from several months to six months from now.”

Ms. Murrison admits she has one concern, “There is some language within the transaction that talks about existing leases and the right to continue existing leases. We want to make sure that if the Bloom family ever wished to sell the resort to another operator that could be done so we’ll be watching that language very closely.”