Applegate Speaks Out On Ballot Measure 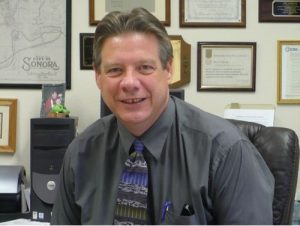 Sonora, CA — Protect Local Control and Funding for Vital Local Services … that is a measure that will be on your November ballot.

This ballot measure is being sponsored by the League of California cities.

From Sonora City Administrator Greg Applegate, “This measure, in essence, would put hopefully a stop to the state raiding local government revenues in the future. We’re hopeful that there would no longer be an open door for them (the state) to go after local governments. We want the voters of California to determine that because we do know by a lot of polling data that people like their local government and I think they would like their libraries and their recreation facilities and the services they can touch, see and smell here locally. We believe the efforts to put this on the ballot will tell the state enough is enough, that it will succeed and we hope it’ll be overwhelming by the voters of California.”