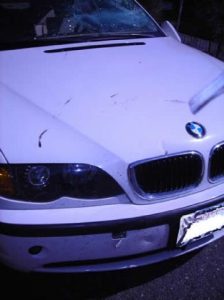 David Joslin was riding westbound on Bradford at a high rate of speed at approximately 2:04. He attempted to make a left hand turn onto Linoberg when his bike left the pavement and became airborne. Joslin crossed into the opposing lane of traffic where his bike collided with a BMW driven by 28 year old Tracy McLaughlin of Sonora.

The force of the impact ejected Joslin from his bike. He struck the vehicle’s windshield and rolled off the hood. He sustained moderate scratches and abrasions but refused medical treatment. Joslin was not wearing a helmet which is not required if you are 18 or older.

The bicycle was totaled while the BMW sustained moderate damage.