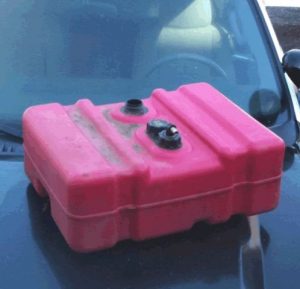 Sgt. Jeff Wilson says the gas can pictured is similar to one believed to be used by the arsonist. Anyone who has had a similar gas can stolen, or who has recently seen anyone in possession of this type of can, is asked to contact the Tuolumne County Sheriff’s Office at 533-5815.

Three patrol cars were covered with gasoline and set on fire at around 3am on Thursday. Sgt. Wilson says as many as eight additional vehicles had various degrees of damage. The crime is currently being investigated as an act of terrorism.