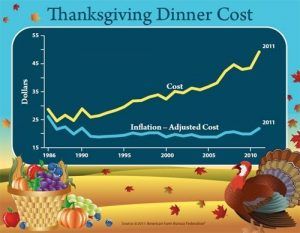 The big ticket item – a 16-pound turkey – came in at $21.57 this year. That was roughly $1.35 per pound, an increase of about 25 cents per pound, or a total of $3.91 per whole turkey, compared to 2010. The whole bird was the biggest contributor to the final total, showing the largest price increase compared to last year.

“Turkey prices are higher this year primarily due to strong consumer demand both here in the U.S. and globally,” said John Anderson, an AFBF senior economist.

In addition, “the era of grocers holding the line on retail food cost increases is basically over,” Anderson explained. “Retailers are being more aggressive about passing on higher costs for shipping, processing and storing food to consumers, although turkeys may still be featured in special sales and promotions close to Thanksgiving.

The AFBF survey shopping list includes turkey, bread stuffing, sweet potatoes, rolls with butter, peas, cranberries, a relish tray of carrots and celery, pumpkin pie with whipped cream, and beverages of coffee and milk, all in quantities sufficient to serve a family of 10. There is also plenty for leftovers.

Anderson said a 30-ounce can of pumpkin pie mix increased because “On the production side we’ve had some issues. A lot of pumpkins for commercial use come from the Eastern Corn Belt, states like Illinois, Indiana, Ohio, up into Michigan. And this spring we had some really devastating weather events. A lot of flooding, a lot of trouble getting crops in the ground generally this spring in that part of the world and I think we’ve seen this year’s pumpkin crop affected by that.”

Anderson adds that sweet potatoes are grown in North Carolina where “Hurricane Irene was bearing down on the East Coast this year… Fortunately, the crop was spared… and we don’t see much price effect.”