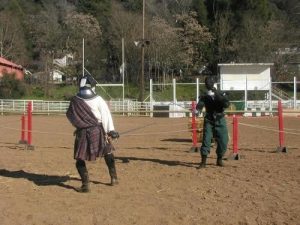 Tonight at 9pm the National Geographic Channel will premiere “Knights of Mayhem.” The hour long episode follows rookies who want to participate in this extremely dangerous sport of jousting. Footage from the Sonora Celtic Faire is featured at 10pm, in the episode “The Harder They Fall”.

Organizer Patrick Karnahan estimates 9,000 visitors attended the event that was held last March. According to Karnahan, they also filmed downtown Sonora and the sunrise. The film crew also followed jousters Eric Dunton and Brian Stephenson of Chelsea, Michigan in the ambulance to Sonora Regional Medical Center to be treated for a concussion. Dunton was so badly injured that he did not compete for several tournaments.

According to Karnahan the Sonora Celtic Faire was lucky to be chosen for the filming. They are not planning on filming the jousting tournament at the next Sonora Celtic Faire taking place March 9, 10th and 11th, 2012. The event is one of the larger Celtic Faires in California and hosts the full-contact West Coast Ultimate Jousting Championship.

The summary from NatGeoTV website: “Testosterone levels are high as the Knights ride into Sonora, Calif., for the West Coast Championship, where blood and concussions take center stage. After being unhorsed in a previous competition, Charlie is determined to defend his title, and sends numerous competitors to the ground – and one home in an ambulance.”