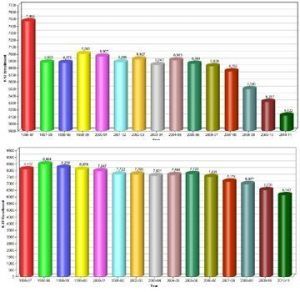 Calaveras County numbers are down slightly from last year’s attendance numbers. Calaveras Unified schools, including the high schools and six elementary schools, reports an attendance of 3,321 in the 2011-12 school year down 53 students from last year. Bret Harte High School, including the alternative and independent study decreased by 81 students, from 867 in the 2010-2011 school year to 786 this year. According to Mark Campbell, Calaveras Unified School District Superintendent, “We have seen a steady drop over the last three to four years mostly due to the economy.” He also said parents tend to move out of the county and transfer to other schools.  School officials watch attendance numbers closely because they impact how much state funding the districts recieve.

Mark Twain Union Elementary decreased by one student and Vallecito Schools are down 25 students overall. Calaveras County Office of Education tracks the attendance of Adult Education, River Academy, Mt Oaks Charter and Oakdale Community and reported an increase in attendance from 522 last year to 552.

Tuolumne County enrollment numbers are not available yet. According to Toni Combs, Executive Administrative Assistant for Tuolumne County Superintendent of Schools, “Information day was October 5th, but we won’t have that information gathered up from all of the districts until the end of October/beginning of November.” It will be interesting to see if the upward trend in Summerville enrollment continues or if it follows the slight downward trend as shown in the chart (see photos).