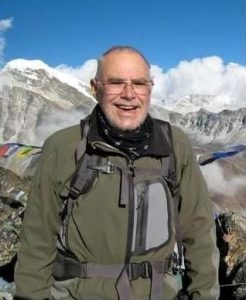 
Park officials say Gene R. Hall, from Olympia, Washington was last seen in the Vogelsang area where he was hiking alone. Reported missing since Thursday, he reportedly failed to show up at his vehicle.

Hall began a backpacking trip at the Dog Lake parking area in Tuolumne Meadows on Monday, August 29th. He was last seen at the Vogelsang High Sierra Camp on Tuesday, August 30th by a group of hikers.

Yosemite National Park is asking anyone in the area of Vogelsang between August 30th and September 2nd to please call the Yosemite Emergency Communication Center at 209-379-1992.

Hall is 5′ 10″, 180 lbs., and has short gray hair. He was last seen wearing a tan or olive shirt, tan synthetic pants, and a dark green or black rain jacket. He also had a dark REI backpack, a purple sleeping bag, a ¾ length thermarest, and black or silver hiking poles with him.

Helicopters from Yosemite National Park and Sequoia and Kings Canyon National Parks have been assisting approximately 65 ground personnel in the search for Hall.