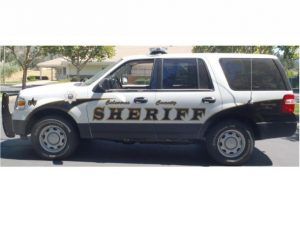 According to the Sheriff’s Office, the old style green graphics has made way to a new design that features discreet black and gold coloring while including the necessary key features in sheriff vehicle recognition.

The change comes in an effort to transition the Sheriff’s Office into a new era and will include the phrase “Community First” on each vehicle.

In order to be fiscally responsible, the Sheriff’s Office will only be putting the new graphics on new vehicles as they are replaced.

Because Sheriff Gary Kuntz believes in using local vendors whenever possible, Gateway Press Inc. in Murphys worked with the Sheriff’s Office in formulating the new graphic.