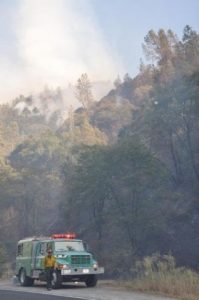 Yosemite Valley, CA– Fire crews from the Stanislaus National Forest are assisting with the now 600-acre Motor Fire on Highway 140 near Yosemite.

According to CAL Fire, air resources from Columbia are also helping out. Today air attack was diverted to the Motor Fire, after there were no signs of an earlier reported fire in the Pinecrest/Punchbowl area of the Stanislaus National Forest.

The Motor Fire reportedly started after a motor home caught fire. Highway 140 into and out of Yosemite National Park remains closed due to the fire.  There is no estimated time on when it will reopen.