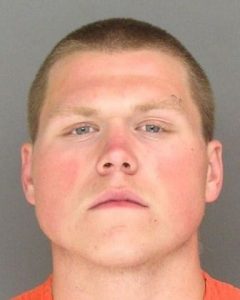 Sonora, CA – A man was arrested in Santa Cruz after allegedly stealing a Cadillac in Sonora. The Tuolumne County Sheriff’s Office reports that 18-year-old Richard Souza of Scotts Valley has been taken into custody.

Sgt. Jeff Wilson says the Cadillac was parked in the area of Stewart Street in Sonora at around 5pm yesterday, and the owner Martin Hagner was putting up “for sale” signs. Souza allegedly offered to buy the car, so the two went on a test drive. Souza pulled over along Highway 49 near the Rawhide Road intersection, and pointed a gun in Hagner’s direction. Souza then demanded Hagner’s wallet and ordered him out of the car.

The vehicle was later recovered in Santa Cruz sitting in the middle of a road after having struck a deer. Santa Cruz officials located Souza nearby with the car keys in his pocket. Souza was arrested on charges of vehicle theft and possession of stolen property. Charges of armed robbery may be added pending further investigation.