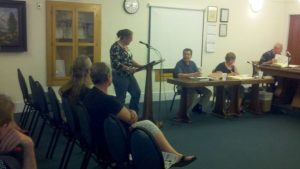 Sonora, CA – The City Council sent a message that medicinal marijuana collectives are not welcome in Sonora.

Last night the City Council voted 4-1 to implement an outright ban. Councilmember Hank Russell was the lone member in opposition.

Mayor Bill Canning feels that the collectives do not fit well in Sonora, notably the historic district. “Some local businesses downtown and some local residents have contacted me, that they didn’t want it next to them,” says Canning. “That pretty much sums it up.”

Foothill Care Collective owner Jason Brisco was noticeably upset afterwards. “They didn’t think about both sides and couldn’t see the whole picture,” said Brisco. “There are a lot of people in this county that use marijuana for medicinal purposes.”

Three representatives from Today’s Health Collective, located outside the city limits on Via Este, also urged the Council to regulate rather than ban. Sara Herrin noted that her collective paid around $10,000 in sales taxes before getting shutdown by law enforcement in May, noting that those are tax dollars coming in when cities and counties are struggling to make ends meet.

James Brisco, Jason’s father, argued that law enforcement officials were not called to any of the collectives for disturbances before the raid by the Tuolumne Narcotics Team. He challenged the council to find out how many times the police are sent to local bars.

The ban starts immediately and only affects the city. Tuolumne County officials are finalizing an ordinance regulating collectives in the unincorporated areas, and it is expected to go up for a vote later this year.