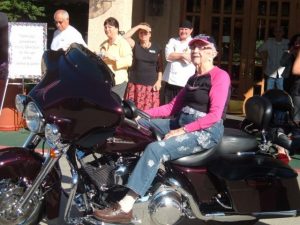 Sonora, CA — A 99-year-old Sonora woman had the ride of her life this morning.

Wilma Andrews had always wanted to ride on the back of a Harley Davidson Motorcycle, and she was given a roundtrip ride from Sonora to Jamestown by local biker Steve Davis. The ride was featured live on the regional television show “Good Day Sacramento.” A camera crew was setup outside of Skyline Place in Sonora, where Andrews resides. Andrews was decked out in Harley Davidson gear, and she picked up the nickname “Wild Wilma.”

It is part of the Make a Wish program that the assisted living community coordinates so that residents can take part in activities that are on the “ole bucket list.”