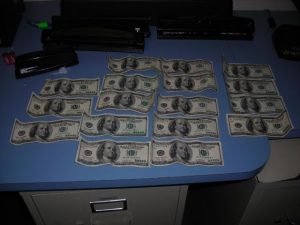 Sonora, CA — Two people pulled over by the Sonora Police Department were found with drugs, and counterfeit bills totaling $1,700.

An officer pulled over a vehicle in downtown Sonora Monday morning because the car had expired registration tags and a brake light out. The driver was 35-year-old Yesnia Bonilla of Stockton and the lone passenger was 36-year-old Robert Sanchez of Stockton. Inside the vehicle the officer located methamphetamine, drug paraphernalia, and 17 one hundred dollar bills.

Upon examining the bills closely, it was determined that they were acid washed five dollar bills, with an image of a hundred dollar bill printed over the top. The security five dollar band and Lincoln watermarks were still visible when examined closely by the officer.