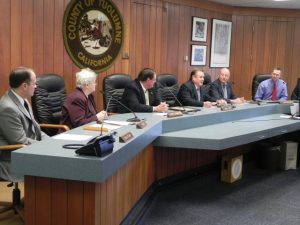 
The County had agreed to purchase the parcels at 574 and 596 Lyons Street, but then received an outcry of complaints from neighboring residents and members of Sonora City Council. In early May, the Supervisors received a petition from 110 residents asking that the vote be reversed. They complained that the County did not notify them about the purchase prior to the vote, and claimed there are safety issues due to a lack of sidewalks in the area. A total of 18 sites had been looked at by the County, and Lyons Street was the preferred location.

The Supervisors voted 5-0 today to abandon the purchase. One of the reasons stated was to “maintain good relations with the City of Sonora.” CAO Craig Pedro noted that the process to find a new location for the housing will start from square one. At a future meeting the Supervisors will vote on a potential settlement agreement with the property owner, Robert Boyer. It is unknown what the settlement will cost.