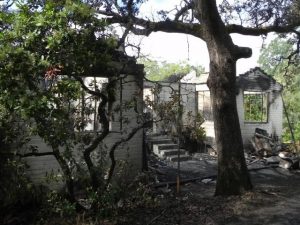 Sonora, CA — Officials have learned that two people died in a fatal house fire this morning.

Friends and family members report that 90-year-old Viola Hootman and 92-year-old Armando Puccinelli were inside the home located in the 12000 block of Mountain View Road. The residential area is situated northeast of the Mono Way and Fir Drive intersection.

Despite their age, Hootman’s daughter Leah Nicolini reports that the pair had stayed very active in the community. “They both bowled and he was an avid golfer,” says Nicolini. “He had just been out golfing this week.”

The Tuolumne County Fire Department reports that the cause of the blaze is still under investigation. The home is considered a complete loss. The fire started at around 3:30am and multiple fire agencies remain on scene this morning. The Tuolumne County Sheriff’s Office says an investigation is ongoing and more information is expected to be released later today.