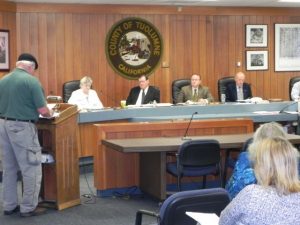 Around 60 workers will receive pink slips. The other positions are either vacant or filled by retiring employees. A final vote to eliminate the 80 positions will not come until June 21st. The only position on the original reduction list that the Board has stated they will not cut is a Veterans Service official. It would have saved the county around $26,000.

The County’s General Fund is facing a $5.2 million deficit for the fiscal year that starts July 1st. The public will have a chance to speak about the proposed eliminations at next week’s meeting that begins at 9am in Supervisors meeting room.