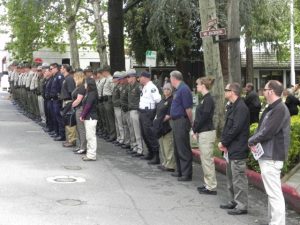 Sonora, CA — A Peace Officers Memorial was held this afternoon at Courthouse Park in Sonora to honor those that have died in the line of duty. California lost 11 officers in 2010. The last Tuolumne County Officer to die in the line of duty was Sheriff’s Deputy David Grant in 2004.


Five of the fatalities last year were within the California Highway Patrol, the most that the agency has had in a single year since 1996. Sonora Area CHP Commander Sam Samra says the memorial was somber, but also a time to celebrate and honor the lives of those that gave the ultimate sacrifice.


“You think about the families and the children that are impacted by that loss, and also the community itself,” says Samra. “It takes a long time for those wounds to heal.”

Officers that were killed in 2010: